This charming enclave of carriage houses and former servants' quarters has been converted into five single-family homes. Each building has a distinctive style and size, although all are made of brick. The owners' houses were located on Overlook Road, easily accessible to the alleyway that is now Herrick Mews. The mansions were constructed between 1893 and 1898, and the stables were built around 1899-1900. Four of the five buildings outlived the mansions which they served.

These carriage houses originally served the homes of the following prominent Clevelanders: 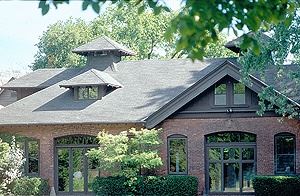