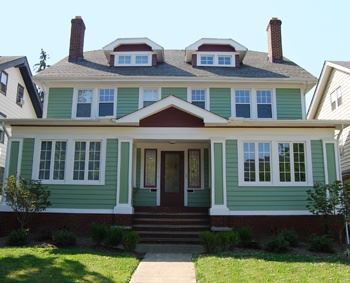 Streetcars had a profound impact on Cleveland Heights' development. Streetcars made the Heights accessible and massive building took place to meet our community's housing demand in the 1910s and 1920s. Cleveland Heights' village population tripled between 1910 and 1920. Between 1921 and 1930, Cleveland Heights' population had more than tripled again to 50,945. Developers saw the need for all types of housing and capitalized on the streetcar lines by placing single- and two-family homes, as well as apartment buildings, along its rail lines. Cleveland Heights has over 1,200 two-family houses, a housing type popular in its day, yet rarely built today, when garden apartments, condominiums, and connected townhouses are so common.

This architectural type goes by many names: double, duplex, two-flat, two-family, Cleveland double, etc., but simply stated, this house type is divided into two living units. Units may either be up and down, or side-by-side. The city's first Zoning Code, passed in 1921, differentiated a 'two-family dwelling' as the up-and-down type, and a 'double house' as the side-by-side type. While there is a wide variety of two-family homes in Cleveland Heights, the most common is a substantial front-gabled structure with identical living units on the first and second floor, each having a living room and large porch facing the street, and a smaller third floor apartment. In Cleveland Heights, the up-and-down units predominate, often grouped together. Side-by-side units are prevalent on corner lots in most neighborhoods, each unit having an entrance off one of the side streets. While up-and-down doubles were prevalent in catalogue books, the corner variety of double house is rare in the old catalogues.

Two-family homes were popular among residents who could not afford to build their own single-family homes-the other portion of the home could be rented to pay for most of the mortgage. However, some homes were purchased by landlords for the purpose of renting both units. Some builders bought up blocks of land for two-family housing development, many times utilizing the same building plans. Builders had easy access to two-family housing plans, as most catalogue books of the day, such as Sears-Roebuck and Company and Home Builders Catalog, offered many options. Developers may have had a higher profit margin in selling these homes, which in most cases covered a higher%age of the site than single-family homes.

Double homes come in all shapes, sizes, and styles, and are present in nearly every neighborhood in the city. Today this housing type is as popular and efficient as it was when first constructed in the 1910s and 1920s.

All Cleveland Heights neighborhoods contain doubles, or duplexes-freestanding buildings that contain two separate residences. Because most were built before the widespread ownership of automobiles, doubles were often built along streetcar lines.

As early as 1907, Cleveland Heights' oldest doubles were built along Grandview and Bellfield Avenues, the city's first paved streets. Most doubles, however, were built between 1915 and 1930, and provided much-needed housing for the city's rapid growth. Doubles provided owners with a home and rental income, and renter with an opportunity to live in an attractive, convenient suburban community without the expense of buying a house.

Doubles can easily be found scattered within most single-family neighborhoods, often in similar styles, such as Tudor or Colonial Revival. Often located on large corner lots with entrances that fact two streets, these impressive doubles blend easily.

Cleveland Heights' doubles are often clustered together, creating a distinctive effect with uniformly set back, generous front porches supported by heavy wooden or brick columns. The North Coventry neighborhood, Cain Park Village, and the Caledonia neighborhood near the Noble-Nela commercial district, contain concentrations of this type of distinguished double home, as does Hampshire Road west of Coventry.

The neighborhood that grew up along the old Cedar Road streetcar line between Coventry and Lee Roads boasts an especially diverse mix of doubles and singles. The Cedar Road streetcar line reached the top of Cedar Hill in 1897, the Cedar-Fairmount intersection in 1907, and Coventry Road in 1918. There were already clusters of doubles on Renrock and Stillman north of Cedar and a scattering of single homes along Cedar Road to Cottage Grove. The first structures of St. Ann Church, a rectory and a recreation hall that also served as a place of worship and a school, had been built in 1915. Partly at the insistence of St. Ann's pastor, Rev. John M. Powers, the Cleveland Railway Company extended its streetcar line up Cedar to Lee Road in 1922, despite protests from some Cedar Road residents. Quickly, the rows of substantial duplexes on Renrock, Stillman, Edgewood, Oakdale, Rexwood, Kensington and East Derbyshire Roads were finished, and handsome doubles and single homes in many architectural styles lined Meadowbrook Boulevard. By 1925, the neighborhood's housing was substantially complete.

The Cleveland Heights Dispatch correctly predicted that the Cedar-Lee intersection, "open country" in 1922, would become "one of the big business centers of the Heights." The building boom initiated by the streetcar was accelerated in 1925 by a Lee Road bus line that linked the shopping center to neighborhoods to the north and south. In 1929, when the streetcar was extended east to Hampstead Road near Taylor Road, the Cedar-Lee shopping center was in full swing with a bustling commercial district, including the Cedar Lee Theatre (a City Landmark built in 1925), Cedar Lee Bowling and Billiard Company beneath the theater, Standard Drug, Mawby's Restaurant, banks, doctors and dentists, book and office supply stores, barber and beauty shops, and a wide variety of grocers and butcher shops.

In 1926, Cleveland Heights High School was completed. The new building's imposing turrets, clock tower and red brick facade added dignity and public purpose to the Cedar-Lee intersection. The new high school replaced the older building at Lee Road and Euclid Heights Boulevard, which became Roosevelt Junior High School. It is now the site of Boulevard School, which was built in the 1970s. The original Boulevard School was on Euclid Heights Boulevard.

By the 1940s, the automobile and bus had taken over as the most common form of transportation, and the Cedar-Lee streetcar line saw its last run in 1946. While the American dream may have been a single-family home, the suburban dream in Cleveland Heights also included more than 1,200 distinguished doubles that still grace its streets and house its residents. Their versatility, charm and unique characteristics are shown in the homes on a self-guided tour of doubles described below.

A Self-Guided Tour of Double Homes