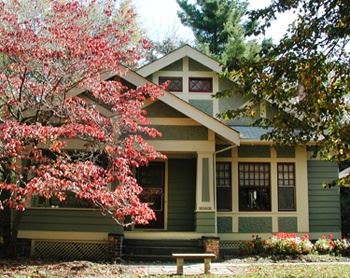 Cleveland Heights is home to hundreds of bungalows, Most likely, there are some in your neighborhood. The term 'bungalow' is derived from 18th-century huts in Bengal called 'bangala.' The single-story design, as well as the name, were adopted by the British and embraced by Americans in the late 19th and early 20th centuries. The typical American bungalow has one or one and one-half stories and strong horizontal lines accentuated by a wide front porch and a low-pitched roof. The roof line is often broken by a front dormer or a front gable. The interior design is open and functional and may feature space-saving built-ins, such as bookcases, china cabinets or benches. Materials often used were natural wood, stone, art glass and decorative tile. Color preferences were natural earth tones.

The bungalow's simple structure is marvelously adaptable. A bungalow can be small and informal or grand and elegant; it may borrow architectural details from the Arts and Craft movement, the Tudor style or the Prairie Style; it may be reminiscent of a Spanish mission or a French chalet. Various national companies and local builders published hundreds of catalogues and pamphlets which helped to popularize the style across the country. Plans for a bungalow could be purchased from builders' catalogues such as Sears and modified to suit the individual owner's tastes and needs. However, the onset of the Great Depression ended the large-scale construction of bungalow homes.

Cleveland Heights is rich in bungalows since most of its housing stock was built from 1910 to 1930 when the bungalow's practicality and relatively modest cost made it very popular. Several neighborhoods and streets boast particularly interesting clusters of bungalows. Middlehurst and Hampshire Roads in 'Old Mayfield Heights,' east of Coventry; Hyde Park Avenue in the Boulevard School neighborhood; and the northwest intersection of Cedar Road and Cottage Grove Avenue are a few examples.

Their charm, affordability and diversity have revived interest in bungalows. Because they have housed Cleveland Heights residents from the 1920s to today, bungalows remain a symbol of the city's enduring vitality, worth of recognition and preservation.