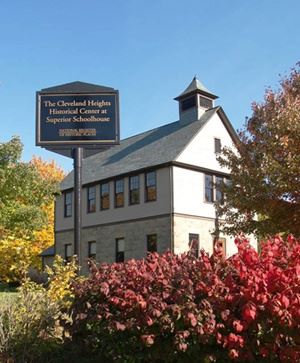 Superior Schoolhouse opened its doors to many school children during the nineteenth and twentieth centuries, and during that time, underwent many changes. While we continue to learn about the evolution of this fine old school, we do know that in January 1859, the Township Board of Education of East Cleveland purchased.84 acres from Park B. and Mary M. Clark for $72. At that time, most of Cleveland Heights was called East Cleveland Township, and we assume that soon after property transfer, East Cleveland District 9 School, a one-story brick school house, was constructed, though early resident remembered that a wood schoolhouse stood on the site prior to that date.

Around 1882, the brick building was either demolished and rebuilt, or more likely faced with sandstone from a nearby quarry, as the area was noted for its farming and quarrying. In 1893, the area's population was on the rise. New residential developments were starting to spring up at the top of Cedar Glen, and the rural community was at the verge of development. A second wood frame story was added to 'Old District No. 9' to accommodate the population growth. This allowed for separation of children by age, and perhaps held six grades in its two rooms. Subsequently, additional windows were added to the second floor as is evidenced by the different window trims inside the building. As development of the area continued, the Hamlet of Cleveland Heights was formed in 1901 and the Cleveland Heights Board of Education took over Schoolhouse Number 9. Cleveland Heights later became a Village in 1903.

In late 1914, again due to overcrowding, a portable Quonset hut was added at the rear of the Schoolhouse. This kindergarten classroom was attached to the coal room, and a former student remembered going through the coal room to access the basement restrooms.

The 1910s were a period of tremendous growth in the Village of Cleveland Heights, and in 1921 the City of Cleveland Heights was formed. New schools were being built all over Cleveland Heights, and by 1924, the two-room schoolhouse had become too small for the burgeoning community. Classroom uses were moved from the building in early 1924, for 'more modern educational methods.' The Board of Education then used the building for its headquarters through about 1928 when it built its new office at 1749 Lee Road (since demolished). Over the years, the school was also used for religious services and Village Council meetings.

The Superior Schoolhouse stood largely empty during the 1930s and early 1940s. From 1947 until 1964 the building was reopened for the education of special needs children. In 1958, the City of Cleveland Heights purchased the property from the School Board and the City Carpenter used the old school for his workshop.

A Landmark is Renovated

The school was listed as the first Cleveland Heights Landmark in 1974 and placed on the National Register of Historic Places in 1979. In 1997, Cleveland Heights voters passed the Recreation Bond Issue, which provided funds to renovate the building. During the rehabilitation of the Superior Schoolhouse, great care was taken to preserve as much of the building as possible. Cabinetry and woodwork were repaired, original paint colors (both inside and out) were applied, original windows were restored and reglazed, and wood siding was repaired. Modern features added to the facility include all new electrical, plumbing, heating and air conditioning, and a wheelchair-accessible entrance and restrooms.